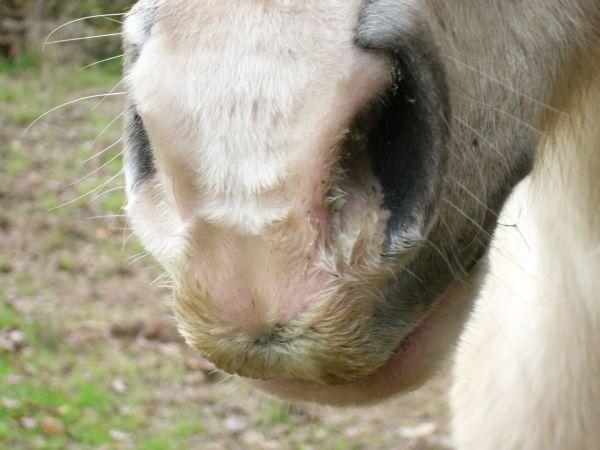 When there is abnormal discharge from both nostrils, and the discharge is foul-smelling and not clear, the most common cause is a primary sinus infection caused by bacteria or a fungus. We would encounter such a situation in common colds, streptococcal and fungal infections. However, when there is nasal discharge from only one nostril, we frequently encounter it as a secondary infection related to underlying dental disease of the upper (pre)molars or- in some cases- the upper canines. Opaque malodorous discharge may be emitted from the maxillary sinuses into which the affected (pre)molar roots are projecting. In both unilateral and bilateral cases of nasal discharge there are a number of other conditions that may be occurring but care needs to be taken that treatment focuses on the cause and not on the symptoms.

As explained, the maxillary sinuses contain the roots of the upper (pre)molars. Any unilateral discharge which has its pathological origin in either the rostral (front) or caudal (back) maxillary sinus warrants careful consideration of such pathology combined with a conservative approach to tooth removal. We have found in the past that a diagnosis of periodontal disease, without considering causal factors, is not sufficient to establish a treatment plan. Individual teeth or groups of teeth may have been subject to occlusal dysfunction for a prolonged period of time. This can lead to feed impaction, tooth displacement, fractures and various stages of periodontal disease.

Treatment has shown that in many cases careful reduction of the length of offending teeth of opposing dental arcades leads to a remarkable recovery of periodontal structures. Combining dental correction and oral sanitation with the flushing of the sinuses and antibiotic treatment is now a preferred first-level approach by us. Conservative dentistry has as its main objective the preservation of dental structures. Treatment outcomes tend to be more positive when horses are younger and when adjustments are made to the diet.

In recent years, open sinus surgery has become a popular trend. We consider this procedure invasive and counter-productive. Sinus access can achieved by modern means with minimal or no scarring through an 8mm endoscopic aperture. Even a 12 gauge (2.7mm) needle provides adequate facility to flush sinuses with iodine or sterile saline solution. Expensive procedures may not benefit your horse's systemic health or its ability to masticate feed.