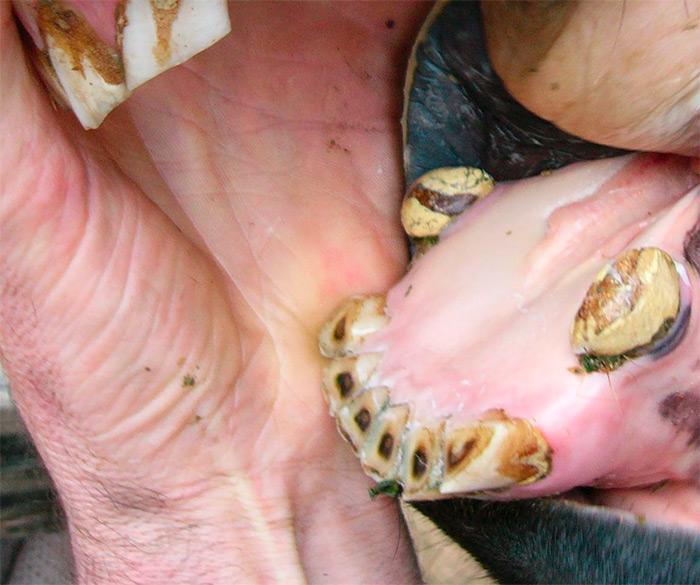 In common with many species, horses may have 4 teeth that are fundamentally different in shape and function to their other teeth. These teeth that are usually only present in males, are called the canine teeth or canines. They are normally placed in pairs in the interdental space half-way between the incisors and premolars in the upper jaw, and slightly further forward from that position in the lower jaw. The canines are sometimes referred to as bridle teeth and the reason behind that name is the proximity to the position of the bit that forms part of the bridle. The canines are not to be confused with wolf teeth as wolf teeth are positioned just in front of the premolar arcades. Canine teeth are substantial teeth; in the average horse 10 to 15 mm is visible in the mouth and there is another 50 mm of their length deeply embedded in the bone of the upper or lower jaws. The roots of canine teeth have pulp canals that supply nutrients to them. The roots curve backwards so the canines are more than up to the task of attacking other horses with them. Fortunately, domesticated horses don’t generally resort to serious attacks on one another.

In the horse, we can distinguish three types of dental function and these are:

Problems with canines in the female also include decay and excessive movement so if any teeth are loose, they are removed.

The main problem with canines is the build-up of plaque or calculus, which is a scaly build-up which mainly consists of minerals from the soil and the feed (see photo). A large amount of plaque often leads to gingivitis, a disease of the tissue surrounding the tooth. Gingivitis is a moderate form of periodontal disease, a condition that, in severe cases, leads to tooth loss. Plaque is always removed to ensure better gingival health.

Fractures of canines in the male horse are relatively common. If it is a minor fracture, the tooth can be re-shaped without causing any further issues. If it is a major fracture, a canine may need to be removed.

Canines can be sharp and cause tongue lacerations to horses that play with leads or ropes for instance. They can also feel rather sharp when putting the bridle on. The correct reatment is to file off a modest amount of material so they are no longer sharp, whilst avoiding shortening them substantially. Aggressive reduction is unacceptable as the tiny pulp canal pulp may become exposed, causing infection to the tooth by allowing bacteria to enter living tissue. Symptoms of this will not become obvious until a much later time. If this occurs, this puts the horse at greater risk of having to have these large teeth removed due to infection surrounding the tip of the root. It is never acceptable to use cutting forceps to cut canines as this risks causing deep fracture of the tooth.

When a bit is fitted, it rests behind the lower canines. Although the bit is well back from them when in use, care must be taken when removing the bridle from the head to prevent the horse from experiencing discomfort or pain, especially when the canines are erupting around the age of 5. Remember to let gravity do the work and let the horse push the bit out of its mouth with its tongue.